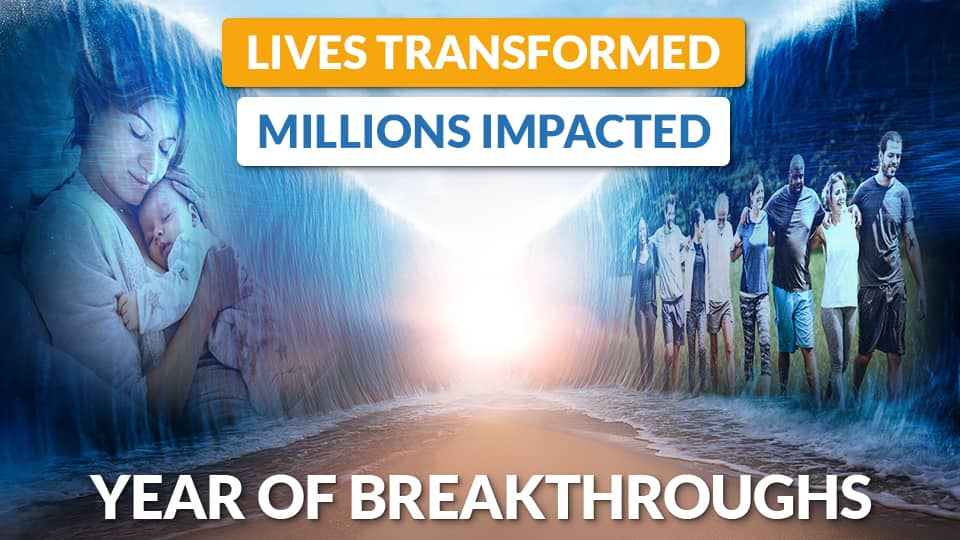 Reaching 70 million views, witnessing a homosexual transformed and women choosing life at the last second. All this and more turned 2021 to an incredible year!

‍2021 will be forever marked in our hearts as a year of great breakthroughs for the Kingdom of God in Israel!

‍We’d like to invite you to a few minutes of celebration as we thank God and thank you for making this possible, and as we share some of the magnificent things that have happened and the lives that have been saved!

This last year we saw an explosion of views of our evangelistic videos. In Hebrew alone, we’ve now reached about 13 million views. And all our videos in all languages have now reached over 70 million views - that’s triple the number of total views we had at the end of last year! We give God all the glory!

That’s quite amazing when we remember our humble beginnings - filming our first video with one slightly broken camera and one borrowed camera. Our hearts are full of thanksgiving and awe at what God has done, as He uses the proclamation of the Gospel to do His supernatural work of transforming lives in Israel.

Every week we have hundreds of responses from Israelis - people writing us online, calling us, and meeting with us. Some of them have already received Jesus, Yeshua, including ultra-Orthodox and Orthodox Jews who have gone all in for Yeshua, risking losing everything, and secular Israelis who saw their need for a savior and turned to their promised Messiah!

One of the astounding stories is Baruch’s, a young man who was living a homosexual lifestyle, but after he experienced a dramatic transformation, we had the privilege of baptizing him here in the Mediterranean Sea.

"
I sensed that Yeshua has healed my heart, and I thank God so much for this

At first, he watched our videos, became interested in Yeshua, and asked us if it’s alright to believe in Him and remain homosexual.

Through several conversations and meetings, we sought to show that if he wants to find fulfillment and true life, instead of looking for the most “comfortable” worldview, he should find out who God really is, and live the way His Creator intended him to.

After wrestling with his own desires and the truth of the Scriptures, ultimately, Baruch decided to leave his old lifestyle behind. What he received instead was a majestic treasure beyond comparison – Yeshua, the Lover of his soul.

We were praying with him regularly, and at one point he shared with us: “Since I began believing in Yeshua and praying in His name, I feel that that lust I used to have towards men isn’t there anymore… I sensed that Yeshua has healed my heart, and I thank God so much for this… What happened could be defined as a miracle.”

How great is our God! There’s nothing He cannot do!

Since then, Baruch has been growing in the Lord and even beginning to share his faith with others from the LGBT community.

‍Choosing Life on the Way to Abortion

Eight months ago we also launched our Pro-Life and Gospel Campaign, which in spite of some major struggles and attacks, God has taken beyond what seemed possible.

She spoke with us on the way to her actual abortion, but ultimately decided not to abort!

Our first video, which shows what an abortion really is, has reached almost 5 million views in Hebrew alone, and we know of at least 78 babies that were going to be aborted but have been rescued after these pregnant women spoke with our helpline counselors!

Several social media giants took down our ads, trying to shut down our campaign, but after many of you fasted and prayed together with us, all of those ads were miraculously restored!

That wasn’t the only miracle! One of the women who was planning to abort chose life for her baby on the very day of her abortion committee meeting. Another chose life on the day her abortion was scheduled, and another woman spoke with us on the way to her actual abortion, but ultimately decided not to abort!

The Gospel is also spreading through our outreaches to the poor! In partnership with Carmel Congregation’s Hadar haCarmel, we’ve been visiting needy families in their homes, showing them God’s love practically, and sharing the Good News with them.

Many of them were deeply touched, several were healed when we prayed for them in Yeshua’s name, and several made the decision to give their lives to the Lord.

When our team visited the next time, she was like a totally different person.

One couple we visited had just immigrated to Israel, then Coronavirus hit, they discovered they were pregnant, and people had cheated the husband at his work. What a welcome to the country!

After they shared their struggles, our team prayed for them. And we kept coming every month, listening, showing God’s love, praying with them, and sharing the Gospel.

At a certain point the wife, Alexa, really understood her need for Jesus and what He had done for her. He captured her heart, and she gave her life to Him!

When our team visited the next time, she was like a totally different person. She was full of joy, hope, and life! And they named their son, “Gift of God.”

God is not only transforming lives through the Gospel in Israel, but also around the world. Through our evangelistic pages in several other languages, just recently, people from Venezuela, India, and Kenya have come to faith in Jesus after watching our videos and speaking with our team!

So what’s in store for next year? Lord-willing, we’ll continue expanding our online and street evangelism, releasing more evangelistic street interviews, and more videos and articles in the Pro-Life and Gospel Campaign, starting new large street outreaches, and more!

Also, we strongly sense God wants us to connect more with prayer groups around the world. We believe that God will use that partnership to produce even more fruit! More about that soon!

And one last thing! This time, we’d like to end with something special just for you. We are overflowing with gratitude for your prayers, support, and friendship! You are a crucial part of every one of these stories of new life, because you helped make them happen!

So this time we’d like to pray a blessing over you!

Abba, I just thank You for every one of our friends around the world who are standing with Your people, Israel, and we bless them in the name of Jesus – the name of Yeshua!

Lord, that You would pour out Your Spirit on them, on their families, on their congregations.

That You would send revival, Lord, that You would give them a renewal in You, Lord, and a hunger and thirst for righteousness and for Your Word.

I pray that You'd give them wisdom, and direction, and guidance, and favor! That Your Kingdom would expand through them. That You would protect them and their families, Lord!

I pray that You would give them health, and that all of Your purposes would be fulfilled in them!

‍In the name of Yeshua the Messiah, Amen!