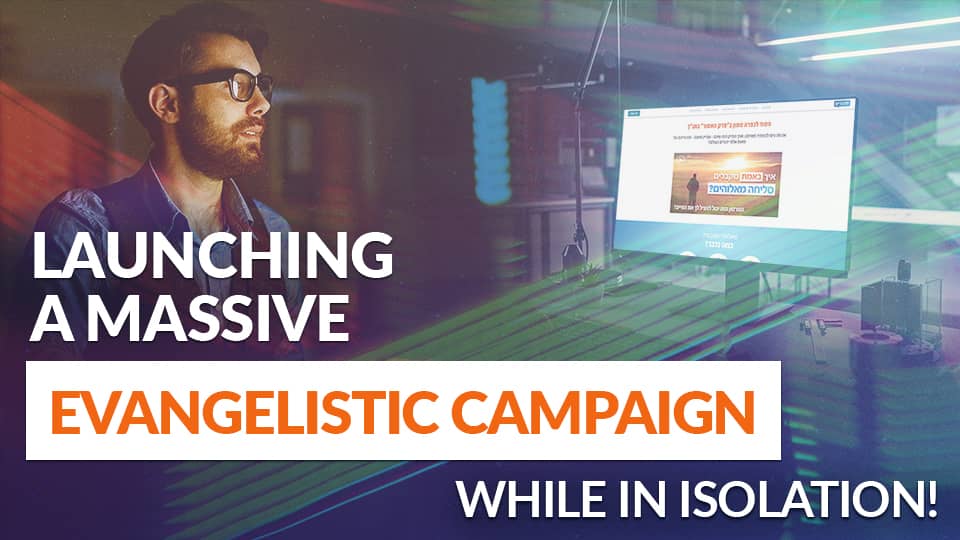 No matter how much the enemy of our soul attacks, our Messiah is still building His congregation, and the gates of hell cannot prevail against it!

Several of us on the team and our family members contracted COVID-19 recently. Several of us have also had significant difficulties sleeping.

And yet, the Gospel is still sounding forth like a trumpet online – in fact, it’s reaching even more Israelis! God is continuing to stir people’s hearts to talk with us, ask for New Testaments, and even come to faith in their Messiah (see some stories below)!

By God’s grace, all of us who had COVID are healed and doing well.

As you may know, we are now in the 10 Days of Awe starting at the Feast of Trumpets and leading up to the Day of Atonement, Yom Kippur, the holiest day of the year on the Biblical calendar. This is a time when many Jewish people are doing some soul-searching and considering whether their names are written in the Book of Life or not.

Since many Jewish people are more aware of their sins and their need for atonement during this season, each year many of them are also more open to the Gospel during this time.

‍We sensed the Lord leading us to launch a massive campaign focused on the Day of Atonement. This crucial message of how to truly receive forgiveness from God is going out in Hebrew right now in multiple formats (videos, graphics, ads, articles) on multiple platforms (Youtube, Facebook, Twitter, Instagram, Google) across Israel!

‍Our goal is to reach 750,000 Israelis with the Gospel during this week and a half. It’s been a substantial undertaking to organize it all and we’re preparing for a huge amount of responses!  And yes, some of us are still in isolation, but by God’s grace we can still reach great multitudes with the Gospel.

But we know that we can’t accomplish anything without prayer, and would greatly appreciate your fervent intercession!

God promised that one day: “I will pour on the house of David and on the inhabitants of Jerusalem the Spirit of grace and supplication; then they will look on Me whom they pierced. Yes, they will mourn for Him as one mourns for his only son, and grieve for Him as one grieves for a firstborn….In that day a fountain shall be opened for the house of David and for the inhabitants of Jerusalem, for sin and for uncleanness.” (Zechariah 12:10, 13:1)

‍Let’s stand on God’s Word for a great revelation of Him whom we pierced, Jesus, Yeshua, and for a deep mourning and repentance across the nation.‍

‍‍‍More Israelis turning to their Messiah

"
Where in my religious village can I get a New Testament? I need a small one that I can hide.

‍Samuel* from Jerusalem contacted us recently and said that after reading about Yeshua online, he began to believe in Him, even though he didn’t fully know how to explain why yet.

Our team member Daniel asked if he had already prayed to repent of his sins and receive Yeshua as His Messiah and Lord. He hadn’t yet, but said he would like to right now!

‍He had some holes in his understanding of the Scriptures, the Messiah, and the Gospel, so Daniel and Eliel shared more with him. He said he was hungry to learn more and that these truths filled his heart.

He really wants to grow, and was excited to receive a New Testament and to connect with a local pastor for discipleship.

‍His wife and family still are not believers, so please pray for courage for him to stand in his new faith, and that he and his whole household would be saved!

‍Mordechai, an ultra-Orthodox Jew from a very religious neighborhood, started talking with us about Yeshua in March.

After some great conversations about the Gospel with several of us, he wrote, “How I long to be in touch with you regularly! But I can’t, because I can’t let my wife know that I’m interested in the New Testament and Yeshua. So I’m going to delete all of our chats each time so that she won’t see it.

But his desire to know the truth won’t let him stop pursuing Yeshua. So just a few days ago, he asked, “Where in my religious village can I get a New Testament? I need a small one that I can hide. Tell me where, and I’ll go get it immediately!”

So we connected him with a pastor in a nearby town, and 40 minutes later he was already there, met the pastor, and received the New Testament!

‍Later we sent him a link to a worship song that was recorded at a Messianic conference. He asked in response, “Wait, was that the event where ultra-Orthodox extremists beat up the Messianic Jews?”

When we responded that it was, he sent a picture, showing that one of his own family members was part of the extremist group that was physically assaulting followers of Yeshua! He said, “If I were to just become secular, my family could accept it. But if I say I believe in Yeshua, they could destroy me!”

Please pray that, especially as Mordechai reads the Scriptures, God would continue to reveal His Son to him, and that he would make the courageous decision to follow Yeshua no matter what the cost.