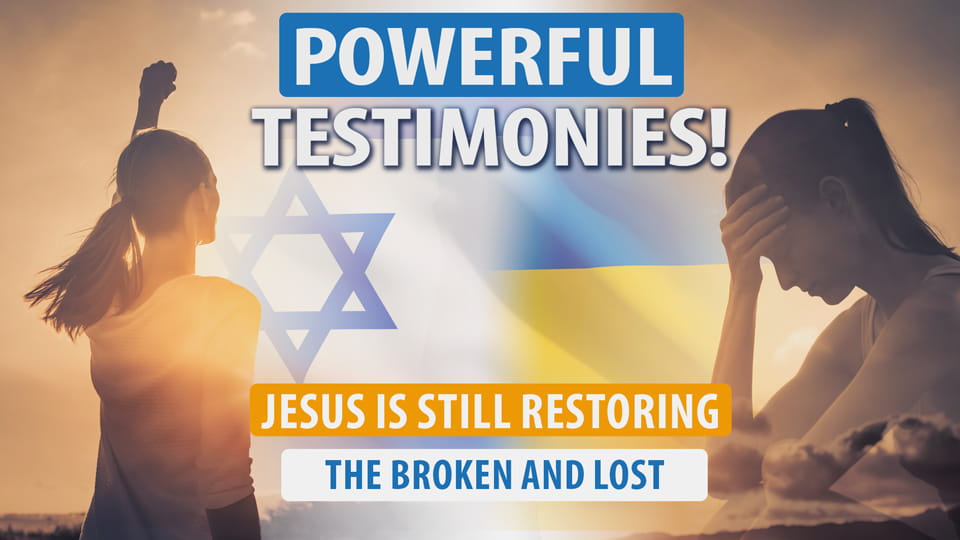 What can you say to help an abused woman, embittered against God; or a man experiencing the horrors of war and loss; or a woman who, out of her own pain, is about to abort her child?

‍
When the young Israeli Zahava* got married, she had no idea what she was getting into. Her husband was a religious Jewish man, and they had 10 children together. But unfortunately, her husband became violent toward her, she had to flee to a shelter for abused women, and ended up divorcing him.

One day she came across our Isaiah 53 video, and started an online conversation with our team member Steven.

But at a certain point, the bitterness that was pent up inside her exploded: “God is not a God of justice, he is just like my ex-husband who is a controller…. My ex-husband and God are very good friends because they are both narcissists who love for everything to happen according to their own will. And now you say ‘only through Jesus can we be saved?’...There is no Messiah, no righteousness, and nobody that will save us. We are our own gods.”

“I'm sorry that’s what you experienced,” Steven empathized with her. “But the God you described is not my God and not the God of the Bible.” Steven shared his testimony of how God healed and comforted him, and how His grace is available to everyone through the Gospel.

He continued, “God is offering you unconditional love. So turn to Him, ask Him if He exists and ask if Yeshua is the Messiah. God loves you, and He wants a relationship with you where He will heal you and give you peace and wholeness.”

We prayed for Zahava as a team, and we’re so grateful to you for all your prayers for salvation in Israel.

A week passed. Then suddenly we saw a public comment on our video: “What can I tell you, friends, you managed to convince me….”

‍You can imagine our surprise when we saw it was from Zahava! Usually people never write that kind of thing publicly for all Israel to see – especially not someone who had been so adamantly against God just a week ago!

It turned out that after seeing our video and speaking with us, God brought another believer into her life who spoke with her more, and ultimately she realized that Yeshua truly is the Messiah and gave her life to Him! And she was very glad for us to connect her with local believers for discipleship!

More and more Israelis are starting to receive this revelation in the last few months:

Please pray that all the new believers would grow in the Lord and become disciples who make disciples.

‍Light of the Gospel in the Shadow of Death

It’s hard to think of a more broken place in the world right now than Ukraine. As we saw the images of people going through such suffering and loss, we asked the Lord, “Is there something we can do to bring Your healing and Good News to them?”

He reminded us that we already had an evangelistic video about overcoming fear, and we could just add Ukrainian subtitles to it and advertise it in Ukraine. And by God’s grace, that video has now reached over 28 million views there!

Thousands of Ukrainians have contacted us, and God connected us with a sister in the Lord in Ukraine, Inna, who could respond to them. In between sirens, rockets hitting her city, losing electricity and internet occasionally, and many other challenges, Inna has been sharing in more depth with these precious people and even calling and praying with some of them!

A local young lady who has cancer watched the videos, called Inna, and accepted the Messiah, a Jewish man from Kyiv realized his need for a Savior, and many more are being touched with the light of the Gospel in the midst of the valley of the shadow of death!

The Gospel has also gone forth from Israel and recently borne fruit, with salvations in Brazil, Switzerland, Sri-Lanka, and elsewhere! Our videos have now reached over 110,000,000 views around the world – we’re in awe of what God has done and give Him the glory! God is fulfilling His promise that the Word of God would go forth from Zion to the nations (Isaiah 2:3)!

Embracing Life in Spite of Challenges

When people look back at their lives, what gives them greater joy and fulfillment than any accomplishment they’ve achieved is the children they’ve brought into the world. And God gave us the privilege of helping Israelis decide not to throw away precious lives through abortion, but rather to embrace them.

We’re so grateful that now, slightly over a year after launching our Pro-Life and Gospel Campaign, at least 137 babies have been saved!

"
This baby is just as much mine as the one that is already born.

Chana was already set to have an abortion in just a few days. She isn’t married, and already has a two-year-old daughter.

She also felt pressure from those around her to abort. But as she was scrolling through Facebook one day, something caught her eye.

She saw our pro-life video there and decided to call our hotline, “I don’t know what to do,” she sighed, “Something inside me is really bothering me about having this abortion.”

When our counselor Rene heard that she was already 18 weeks pregnant, she responded, “Chana, your baby is already fully formed!” and shared more with her about the beautiful life inside her womb, and about the cruel death the baby would face through abortion. She encouraged her that if she’d choose life, we and our partners could help her all the way until birth and after.

Chana thought about it and made her decision: She canceled her appointment! In fact, she surprised us with this insight that we can even share with other pregnant women. She said, “This baby is just as much mine as the one that is already born.”

Speaking of which, our team is blessed to have a “ministry expansion” on the way. We’re expecting our sixth, Eliel and Lydia their fifth, and Avi and Liora their fourth. As the Scriptures say, “Behold, children are an inheritance from the Lord, the fruit of the womb is a reward” (Psalm 127:3).

Proclaiming Salvation to the Brokenhearted

By God’s grace, since we’re helping these women and staying in touch with them, we’re able to also visit them in their homes, meet their needs, and share the Gospel with them.

Malka, a religious Jewish woman, underwent abuse and is suffering from severe diabetes to the point that she’s on bed rest. But still, she decided to keep her baby after speaking with us.

"
I cry all day...I need strength, peace, joy, and salvation!

Our team member Rachel visited her together with a believing woman from the area, brought some food and clothing, and the three of them spoke together for about four hours. They were able to testify of what Yeshua has done in their lives, share Scriptures, and pray for Malka.

Malka is still carrying the deep pain of what she’s experienced, and recently wrote us: “I cry all day…I need strength, peace, joy, and salvation!” Let’s pray that she and many others will realize that only in Yeshua can we find salvation and peace!

We’d also appreciate your prayers as we’re currently establishing a network of believers in every area that we can train and mobilize to visit these families, develop a relationship with them, show them God’s love practically, and share the Gospel with them.

Lately, we’ve felt like Nehemiah: Just as he was seeking to build up the walls of Jerusalem and was constantly attacked in multiple ways, so we’ve experienced intense spiritual battles that are trying to hinder us from building the Kingdom of God here in Israel. Please pray for breakthroughs for us – that God would give grace, health, protection, unity, and wisdom, so that we’d be able to complete the work He’s given us, and that many would turn to Him as a result.