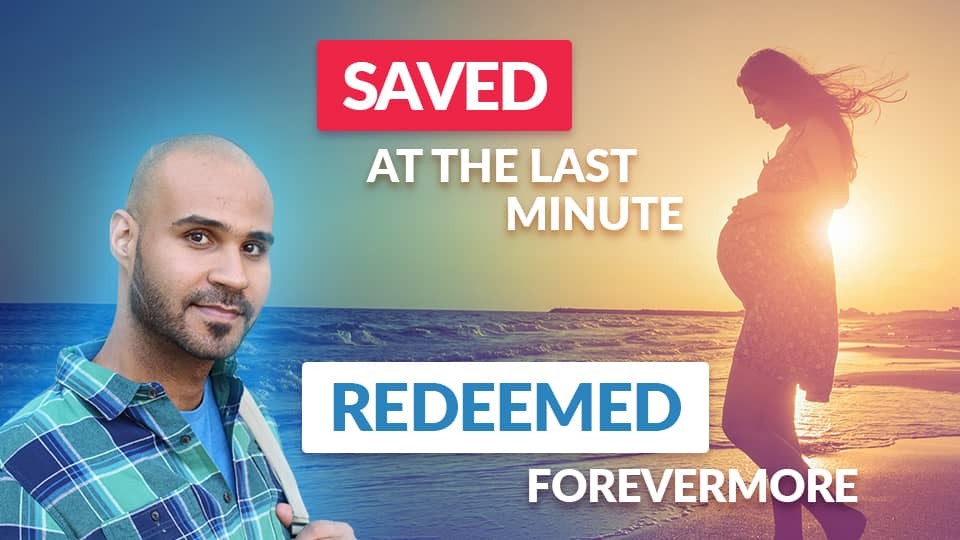 "Some of the stories we’re about to share with you caused me to weep tears of joy, because it’s so overwhelming and beautiful to see what God is doing here in Israel!"

In just the last few months, several million Israelis have heard the Gospel and the pro-life message, and God is using it to transform lives!‍

A man named Yaron* called us recently – he’d been watching videos about Jesus – Yeshua – he read the New Testament on his own, and came to the conclusion that Yeshua is his Messiah and Savior. He even wanted to get baptized immediately and excitedly asked, “Can I do it by myself?”

"
Inside my heart, I know this is the right thing to do, and I can’t escape that.

‍But then he shared an inner fear that is holding him back: how will his wife and his religious Jewish family react? He’s quite certain that she will leave him.‍

Our team member Eliel read to him the words of Yeshua from Matthew 10 about the cost of following Him (including possibly losing one’s family), but also the reward of eternal life in Him.

We never know how people will respond to this difficult truth, but Yaron’s reaction was surprisingly positive. He said, “These verses are emotionally moving.”

He also said: “Inside my heart, I know this is the right thing to do, and I can’t escape that.”‍

So he decided to move forward with it! We connected him with a local congregation to baptize and disciple him.

‍An Orthodox Jewish lady, Yasmin,* called us a while ago. She said, “I felt something inside of me urging me to call you for several weeks.”‍

She told us how she saw our Isaiah 53 video, and it stirred something in her heart – she had never heard this kind of message before! She showed the video to her husband, but he immediately got upset and told her to shut it off.

Yet still, for several months, she would call at least once a week, and our team member Yoni would answer her questions. Each time they read through different Scriptures, especially the prophecies about the Messiah. And she kept asking for prayer in Yeshua’s name!

At a certain point, Yoni connected her with Hannah, a deaconess of a local congregation who has a similar background. After several more conversations, Yasmin declared, “I have decided that I now believe in Yeshua. So I went out and got a full Bible, including the New Testament, and put it out on our living room table.” In her community, she could find herself in dangerous waters after doing something like this, so that really took a lot of courage!

Please pray for Yaron, Yasmin and many others like them – that they would stand strong even when they’ll likely face tremendous pressure from their families, and that they would stay connected with the Body of Messiah so that they can grow as disciples of the Lord!

‍Recently, as our team shared what God has been doing through our Pro-Life and Gospel Campaign, I started to weep tears of joy.

For most people, if they get to be involved in saving just one person’s life, it’s an experience they’ll never forget for their whole life. But God gave us the privilege to take part in saving five babies from abortion in just one week – and 25 babies since we launched the campaign just a few months ago!

‍Galya* from Jerusalem had already set up an appointment with the governmental committee that gives approvals for abortion in Israel (they approve 99.3%!).

But then, our ad popped up, she decided to call our helpline, and our counselor Roberta answered. Roberta has a burning passion to save lives, and often fasts, prays, and perseveres in showing God’s love and sharing the truth – all so that women will choose life.

After speaking with Roberta, on the very day of her committee appointment, Galya decided...not to go but rather to keep her baby!

"
If God gives you a child, then He’ll give everything you need to go with the baby.

As if that story wasn’t dramatic enough, we also got a call from Yael,* who already had an appointment set for an abortion in just a few hours! She was full of anxiety, thinking she wouldn’t be able to take care of a child. Our counselor Rene told her, “Yael, if God gives you a child, then He’ll give everything you need to go with the baby,” and shared how we also could help her practically through our partners.

Yael said she’d think about it. A little while later she sent her decision. She said, “Thank you so much, now all the confusion is gone. I’ve cancelled the abortion appointment.”

We know that God is doing miracles like these because you’re praying! So we’d like to ask for your prayers for wisdom and strength for our counselors dealing with difficult calls at all hours of the day.

Please also pray for our two new video testimonies we’re about to release as part of our Pro-Life and Gospel Campaign – that they’d reach millions in Israel and around the world and have a deep impact!

That’s not all! We’re also working on several new evangelistic videos – street interviews, an apologetics series, and more! Please pray for guidance and anointing so that these will touch many lives for God’s glory!