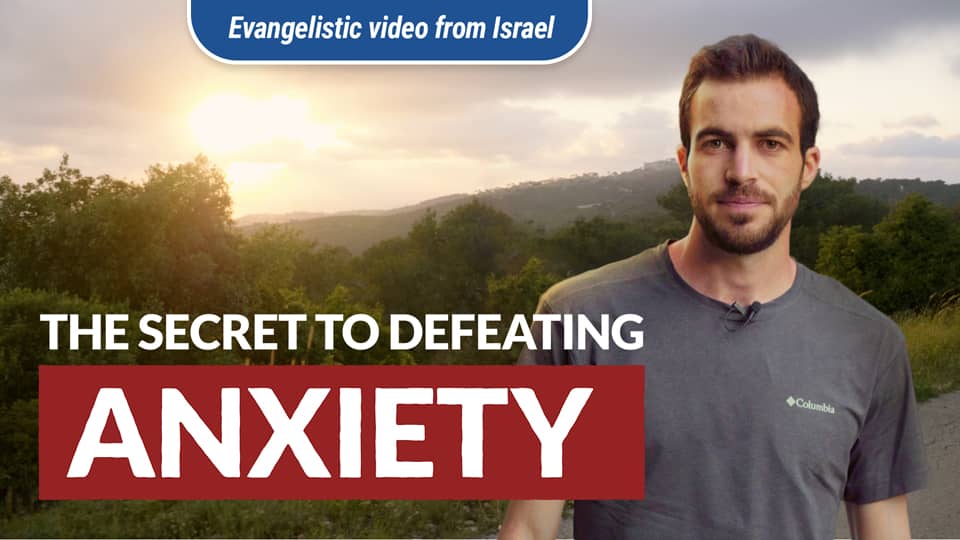 In times of uncertainty, one thing is still sure: there’s only One who defeated death and whose perfect love drives out all fear. See the Gospel presented in a unique way to Jesus’ own people!

We all experience it, we all know what it feels like. We’re all trying to deal with it all the time, but to be honest, we don’t always succeed.

But there is a way to overcome fear! Millions have succeeded in it, and in a moment we’ll reveal how, but first: What is fear, actually? And why do we get anxious?

We’re not talking about healthy fear – say, the natural reaction when a truck is heading straight for you. That kind of fear prepares us for clear and present dangers, and to protect ourselves.

We’re talking about fears and anxieties like: “How will I make ends meet this month? “What if a family member or I die from cancer or a horrible disease? “What if something terrible happens to my son in the army? What if others reject me?” These worries that spin around in our heads affect our emotions, our decisions, our relationships, our health – our whole lives.

So what exactly happens when we get stressed? Let’s say you had an argument with your boss at work. You start to get anxious: “He’s definitely gonna fire me! “And then how will I pay for the house?

Oh man, what will this do to my family? It’s already a stressful time!”

Every anxious thought like this releases more and more “stress hormones” in our body, which, according to studies, increase the likelihood of heart diseases, cancer, marriage problems, clinical depression, and more. They even decrease IQ levels and cause obesity.

But wait! It was just a disagreement, and look where we ended up! When we let stress and worry take over, we don’t see the situation as it is, every mosquito turns into an elephant, and ultimately all we do is hurt ourselves and others, and don’t really solve anything.

OK...but what about the frightening things that will happen? They say two things are certain in this world: Death and taxes. As for taxes, we have to deal with them all the time. But what about death?

You probably don’t exactly wake up every morning and fantasize about your death! You don’t say, “Wow, it will be so much fun! I can’t wait!”

So why do we not want to think about death? Because it stirs up fear – we don’t know what will happen afterwards.

We’d rather tell ourselves that everything will be alright, that we have more time, and meanwhile, we’re focused on our career, or family, or TV, or the internet. There’s nothing wrong with those things in themselves, but in all honesty, can they cause the problem of death to disappear?

Sometimes we reach the conclusion that we need to get up, look fear in the eyes, and take matters into our own hands. That’s the only way it’ll work!

Our tendency many times is to depend on our own knowledge, our own strength, and our own abilities. But is it really always enough?

One of people’s most common fears is drowning. And in 1911, a British shipbuilding firm constructed a ship that they themselves called “unsinkable.” About 100,000 people gathered to watch the maiden voyage of the largest, strongest, safest ship that the world had ever seen!

They said, “Not even God himself could sink this ship."

Titanic – that was the ship’s name, and its tragic story is familiar to us all.

Has it ever happened to you, that you thought you were in control, but in the end everything went wrong? We aren’t actually as strong and secure as we like to think. There are things that we don’t even see that can ruin everything for us.

There are situations in life where our money, our wisdom, and our strength
reach their end. And one day, we will also reach the end. And what will you do then? What can help us at that moment? Or maybe we actually need to ask: “Who can help us?”

The truth is, there is someone who is not only able to help, but also desires to help. After all, someone created this whole universe – the sun and the stars, the sky and the sea, the mountains and the animals. He’s the one who created us as humans as well. And the name of that “someone”...is “God.”

God is a loving father who longs to be with us, his children. He invites us to come to him and find security and true life in him. The problem is, according to the Tanakh (Hebrew Bible), there’s something that separates us from God. After all, he’s holy… and we’re... not exactly holy. The name of that “something” that separates us, is “sin.”

Sin is when we disobey God – when we lie, covet, think evil about others, act selfishly, and live our own way, as if we were God. If we’re honest with ourselves, who of us hasn’t done these things, and many others? The truth is, this is a global pandemic. Humanity is sick with a horrible, fatal disease,
the disease of sin!

And according to the Scriptures, the result of sin is death – being cut off forever from God, the creator of life – and eternal punishment in a place we don’t wish for anyone. (Ezekiel 18:4, Daniel 12:2, etc.) But there’s good news! God prepared a way to be saved from death and the fear connected to it – a way that leads to life.

Now, in order to receive forgiveness from sin, God said that a sacrifice is needed: “For it is the blood that makes atonement for the soul.” (Leviticus 17:11). And God promised in the Tanakh (Hebrew Bible), that he himself would send the perfect sacrifice, the Messiah, who would pay the price of our punishment with his own blood – who would die instead of us.

Isaiah 53 says of the Messiah: “We all, like sheep, have gone astray,
“Each of us has turned to our own way; And the Lord has laid on him the iniquity of us all.” (verse 6). The Messiah “was cut off from the land of the living; for the transgression of my people” (verse 8). But that’s not the end.
In fact, it’s written that after his death, he would “prolong his days, and the will of the Lord will prosper in his hand” (Isaiah 53:10). In other words, he would rise from the dead, and accomplish the mission for which he was sent. Who could this be?

There’s only one in all history who fulfilled these prophecies and many other specific prophecies about the Messiah of Israel. His name is Yeshua, Jesus of Nazareth.

Contrary to popular belief, Jesus was faithful to the Tanakh his whole life.
He’s Israeli, one of our own, a descendant of King David. He walked the streets of Israel 2,000 years ago, he died for our sins, and rose from the dead. More than 500 Jewish people saw him alive after he had died! So what does all that mean for us? Through his resurrection, Jesus the Messiah defeated death, and so he’s able to give us eternal life with God, in a place where pain and tears are no more.

Jesus said, “I am the resurrection and the life; he who believes in me will live even if he dies” (John 11:25).

We don’t deserve any of these things, but Jesus did all of this, because he loved us. He laid down his life and shed his blood for each and every one of you.

All we have to do is to believe in the Messiah that God sent, Jesus, Yeshua, and to decide: “OK, I’m not going to live my way anymore, but God’s way.”

And everyone who believes in Yeshua doesn’t need to fear anymore, because even if the worst thing happens to us – death – it only leads to everlasting life!

Jesus set us free so that we can live the life we were created to live – To know God and show his love to others in this broken world. And he invites each and every one of you to this exciting adventure.

Of course, there are still real challenges in this life, but ultimately God uses even them for our good,  so that we will grow and be strengthened. And the truth is, there’s nothing to fear, Because “If God is for us, who can be against us?” (Romans 8:31).

We know, lots of this is new and surprising for you. That’s how over half a million Jewish people felt, but they took courage, checked in the Tanakh and in history, and realized that Yeshua is indeed the Messiah, and believed in him. We also dealt with concerns like, “What will they think about me if I follow Yeshua – what will happen to me?” The truth is, there is a cost. But there’s nothing in this whole world that is worth more.

In the words of the New Testament, “But in all these things we are more than conquerors “through him who loved us. “For I am convinced that neither death nor life, “nor angels nor principalities, “nor things present nor things to come, “nor powers, nor height nor depth, “nor any other created thing “will be able to separate us from the love of God that is in Messiah Yeshua our Lord.”(Romans 8:37-39).