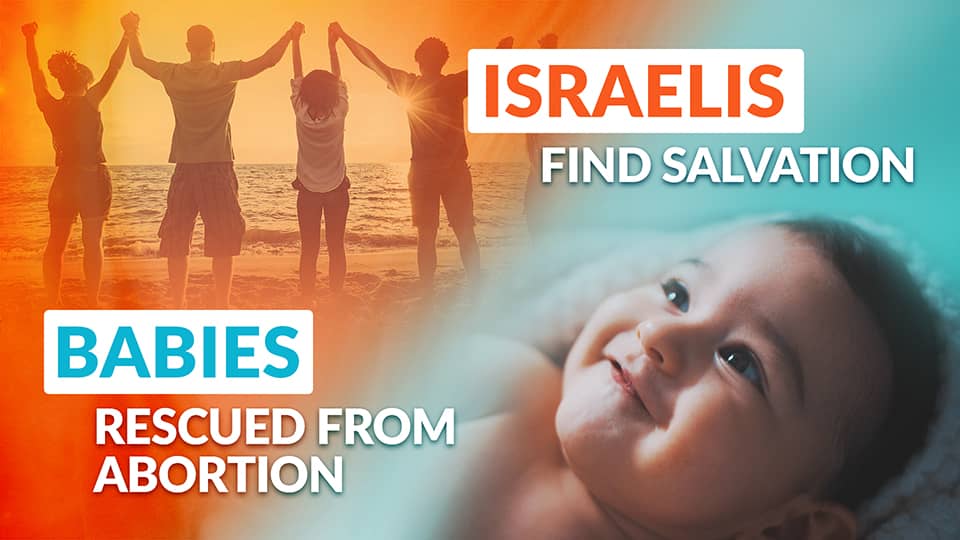 Israelis are being saved from their sins and Israeli babies are being rescued in the womb! And some surprising good news from the Arab world!

The recent war between Israel and Hamas, combined with rioting and violence here within Israel, have shaken many Israelis – Jews and Arabs – to the core.

But even in these turbulent and frightening times, God gave us the privilege of participating with Him in saving lives – physically and spiritually!

‍During the war, the Good News of everlasting life in Yeshua, Jesus, was spreading rapidly online in Israel. Hundreds of thousands of Israelis watched our video, How to Overcome Fear and Anxiety.

‍And the Gospel’s spreading from house to house as well. Recently during our outreaches to the poor, we prayed for two different ladies with significant health issues, Jesus healed them both, and they both gave their lives to Him!

‍Also, there is a young man who had been a religious Jew, and then he turned to Buddhism and eastern religions. But just a few days ago, he met with us and decided to surrender his life to Yeshua!

‍And the Gospel’s spreading to the Arab world as well. We recently shared about “Varisha,” an Egyptian Muslim woman who found our evangelistic website, spoke with us, and decided to follow Yeshua. After being threatened and beaten for her new faith, she still courageously decided to publicly declare her faith in Yeshua, and a few days ago, she was baptized!

There’s more! Since our Pro-Life and Gospel Campaign was launched about 2 months ago, it’s now reached over 2.4 million views in Israel, thousands of Israelis have contacted us, and by God’s grace, so far at least nine babies who were going to be aborted have been saved!

‍During this time of intense fighting between Jews and Arabs, it’s been beautiful to see that both Jews and Arabs have been calling our Pro-Life and Gospel hotline - from every part of Israel, and even from Judea and Samaria, the West Bank! And they’re choosing life for their children!

A woman we’ll call Anat contacted us for an abortion, thinking that we’re an abortion facility!

She had already paid for university studies, then suddenly found herself pregnant. She said, “I can’t possibly have a baby and study.”

Our counselor answered, “You can always do your studies later. But if you give up on your child, you can never get him back. It’s irreversible.”

Anat ultimately decided to keep her baby. And actually, while we were preparing this update, she called excitedly with the results of her recent test: Surprise! She has twins! If she had had an abortion, two babies would have died. But now both will live!

Another lady we’ll call Rachel saw our video and burst into tears. She’s just 19 years old, pregnant, and in a desperate situation: “I can barely stay above water. How can I raise this baby?”

‍Our counselor comforted her and offered her practical and financial help through our partners. She connected her with a pro-life counselor in her area and Rachel decided to be a young mother to this baby!

‍Who knows how many more have watched the video and chosen life for their baby without even contacting us?

‍One of the most surprising calls was from a government-sponsored healthcare provider, asking us to speak with one of her clients about keeping her baby! Her institution would usually perform the abortion and even receive funds for it from the government! Please pray for more courageous healthcare workers to work with us and help bring life to Israel!

Please also pray for all these new babies. The new believers, “babies" in the Messiah, need a lot of help to start their new lives and often face great opposition from family and friends. There’s a battle for every one of their lives. Please pray that they’ll consistently meet with believers for discipleship and grow in their new faith!

And please pray that, as we and our partners continue to help these new parents and their babies, God will open the doors for us to share about the One who can save them and give them everlasting life!

We’re so grateful for your support and prayers and God’s provision that enabled us to expand our team here with new members to help with the evangelism, pro-life work, and follow-up. But we still need many more hands in this harvest - would you pray with us for that?

As we celebrate these new lives with you, we’re greatly encouraged that the One who has begun this work has promised to continue to breathe life into the dry bones of Israel, bringing life unto the ends of the earth!