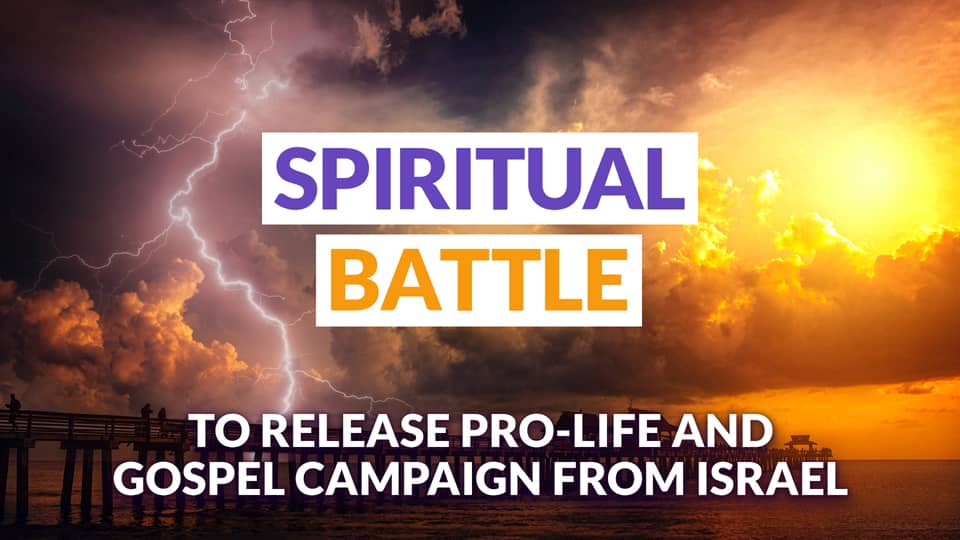 We are excited to share that we’re in the final stages of production before we launch our Pro-Life and Gospel Campaign. But there is a real spiritual battle here, and we have some crucial prayer requests to share with you.

A little context first: There have been over 2 million abortions in Israel since the modern state was born in 1948 - and there are only about 9 million people in Israel today - so this is something that hugely affects this nation. But most Israelis have been told that abortion is perfectly normal. For example, women serving in the Israel Defense Forces can receive three abortions, paid for by the government, during their two-year service!

​Our hearts, and God’s heart, are broken over this shedding of innocent blood. And we sensed God calling us to launch this campaign - the first of its kind in Israel - in order to change hearts and minds and help Israelis choose life and also find forgiveness in their Messiah! Would you please agree with us in prayer for a mighty breakthrough and an awakening in Israel?!

‍​By God’s grace, we’ve completed two powerful testimonies and almost completed a new website, graphics, articles, and more. We’re preparing a massive social media campaign, and are establishing a hotline for pregnant women and those who’ve been involved in abortions. And right now we’re in a critical period of filming our last video before the launch showing the truth about what abortion really is.

We’ve had a number of difficulties and delays in this campaign, and we realize that we need your prayers to help us birth this campaign as soon as possible! It’s already overdue!  We really want this to get out and for lives to be saved!

​It took us many months to get approved by different social media platforms to be able to advertise videos related to abortion. But since then, we’ve faced major opposition and censorship from Big Tech - both about pro-life issues and about the Gospel! Please pray that the same God who has brought down giants and walls in the past will intervene on our behalf now!

We also would appreciate your prayers for protection for us and our families: Last time we released a video about this campaign, within a month, I had four family members in the hospital - my Mom had three car wrecks and a stroke, my sister went into a coma and almost died, and more. Praise God that He healed them ultimately, but you can see that there’s intense spiritual warfare here, and we really need your prayers to win in this battle!
‍

A Big God for a Big Vision

After the campaign launch itself, we’re planning, Lord-willing, to make more videos including a street interview, to help launch a grassroots movement of believers sharing the message of Life on the streets with Israelis, and to produce a massive ad campaign on TV, billboards, newspaper, radio, and signs on public transport.

God promised that once Israel turns to their Messiah, it will bring “life from the dead” for the rest of the world (Romans 11:15). And we believe He wants His truth to go forth from Zion - the message of life for children in the womb and eternal life for all through the Gospel of Messiah. So we’re planning, Lord-willing, to reproduce the videos in at least 18 languages - because many nations don’t have a lot of resources in this area.

It’s a big vision, but we have a big God. Jesus, Yeshua, promised us: “Ask, and it will be given to you; seek, and you will find; knock, and it will be opened to you” (Matthew 7:7). We know that saving lives is God’s will, so please join us in praying with confidence and perseverance - and believe that He will do wonders!​

If you know of any groups or individuals who want to see the Gospel and pro-Life message move forward in Israel and around the world - please share this video with them, meet with them, and pray!

You’re also welcome to join us in fasting and praying a day this week for this campaign.

Get these exciting stories of what God’s doing in Israel straight into your inbox by signing up here!